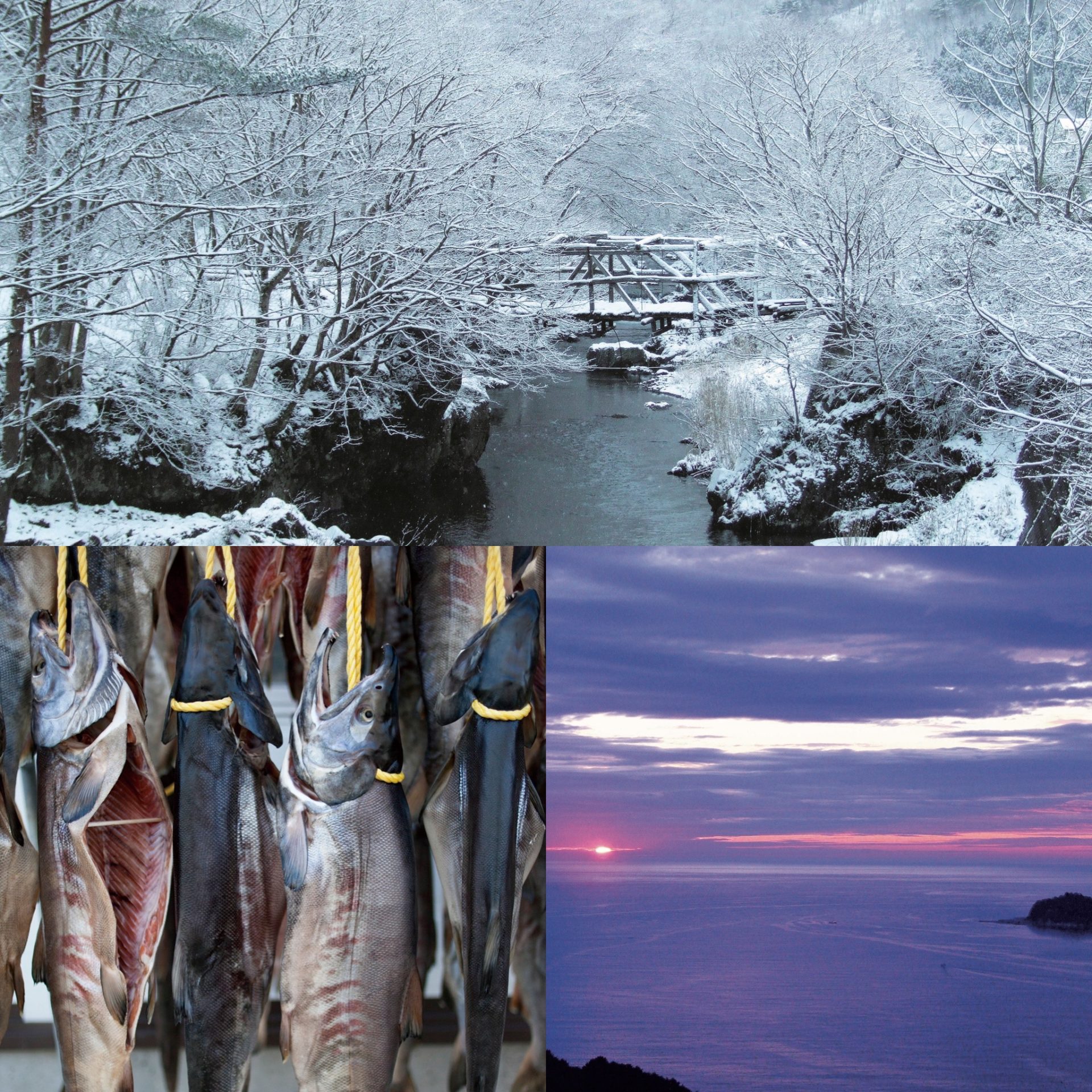 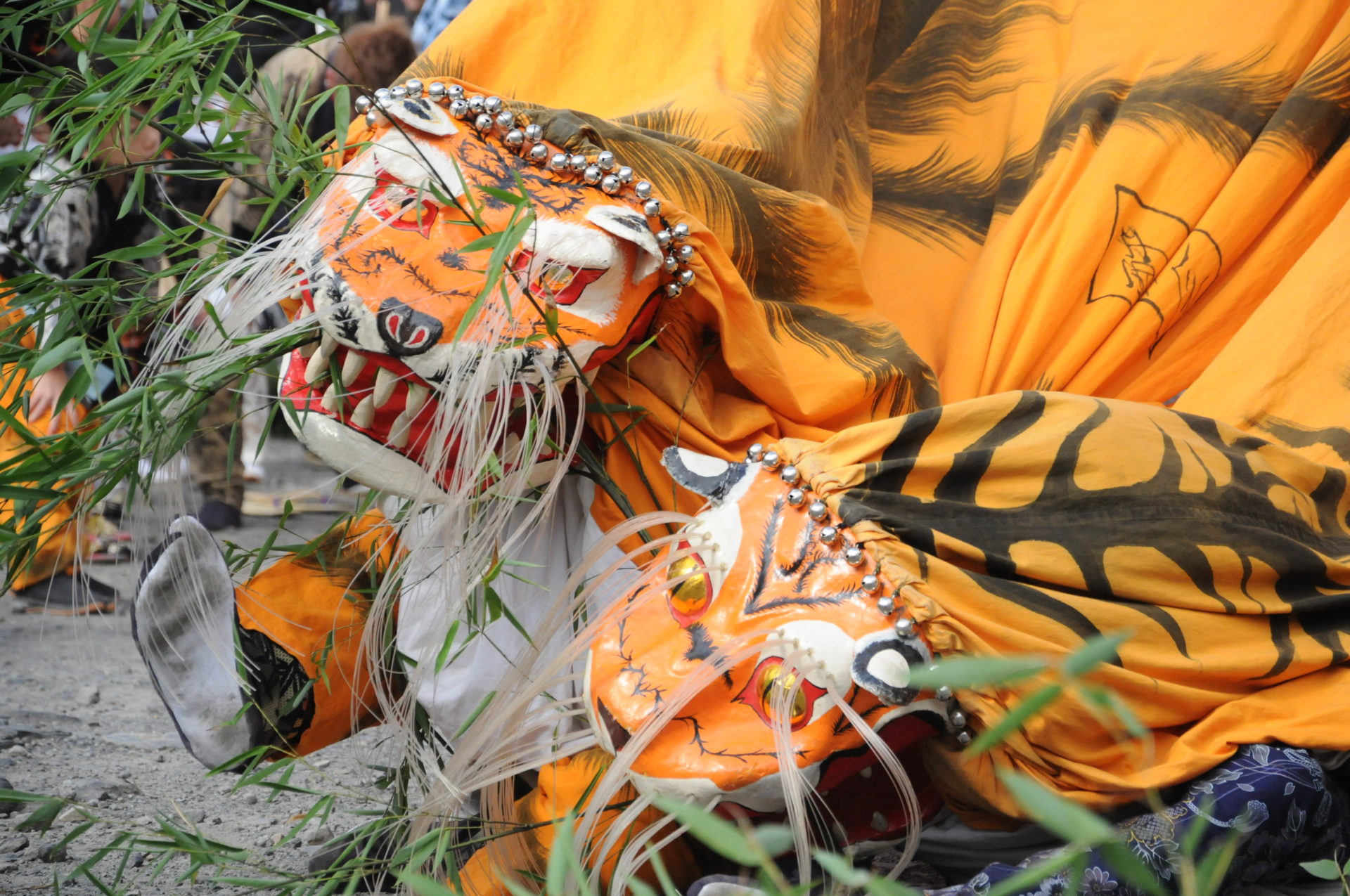 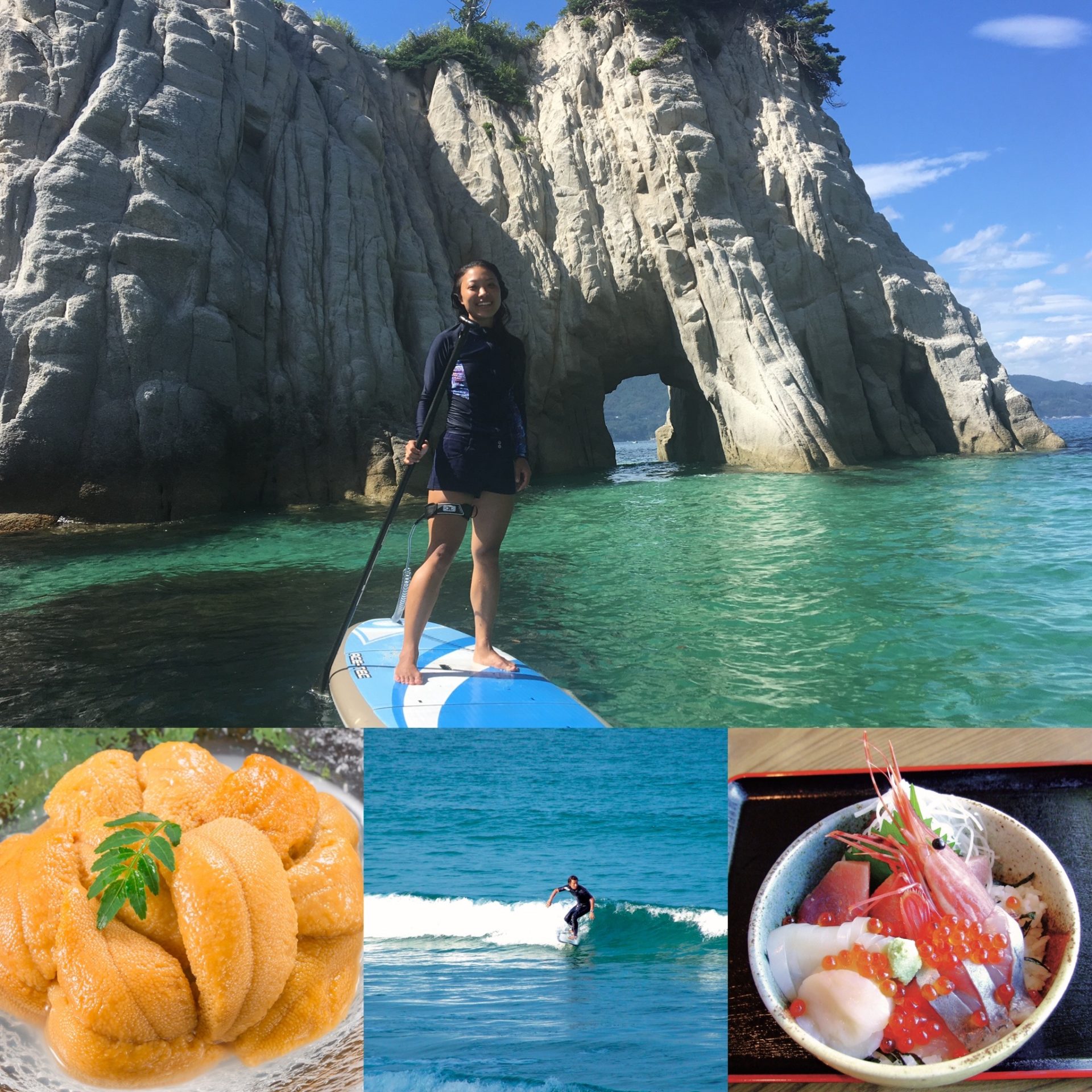 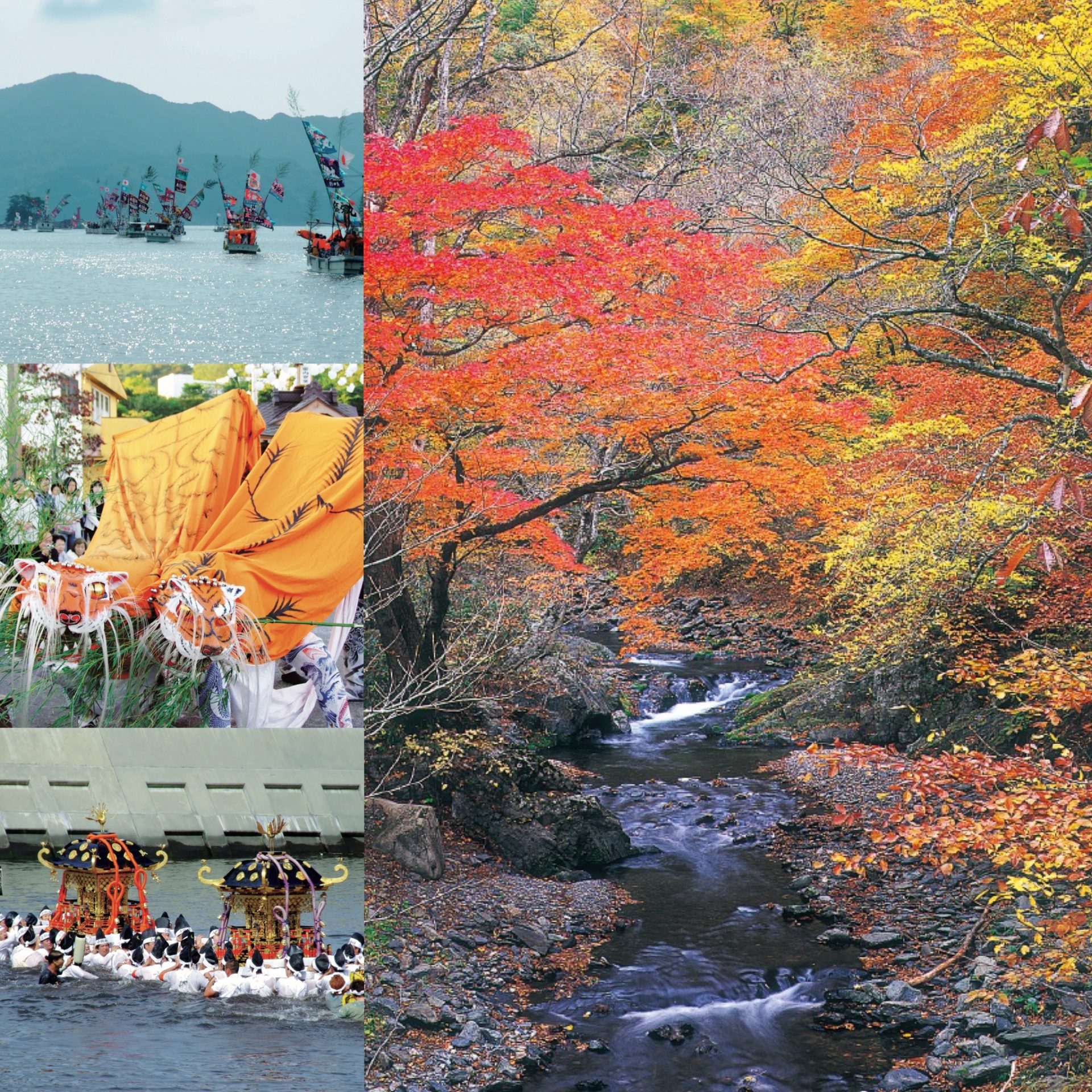 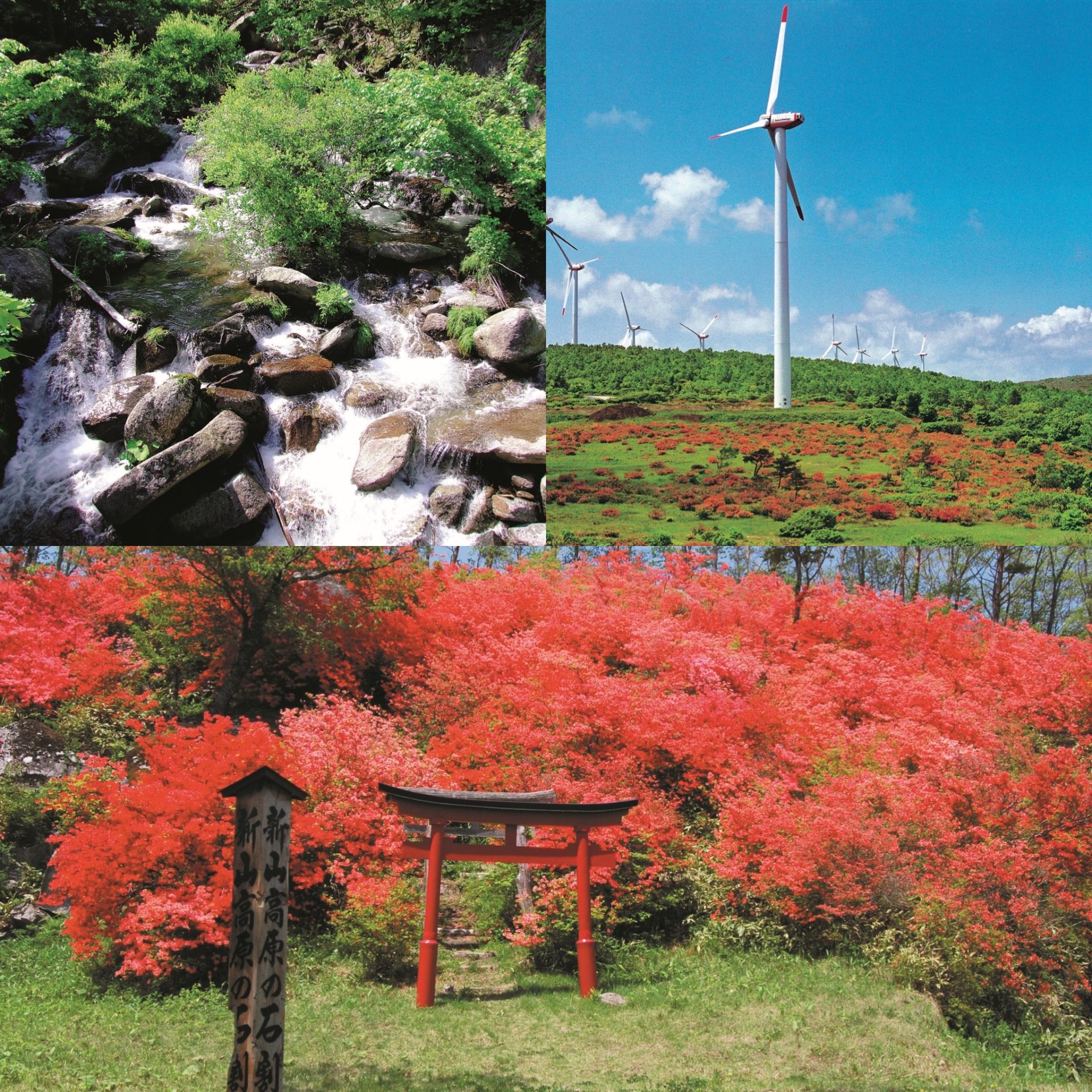 A town with marine and mountain sports

Situated in the middle part of the Iwate coastline, the main industry of Otsuchi-Town is fishing. A salt-preserved salmon delicacy called Aramakizake is one of the most well-known products of Otsuchi. Air-drying salmon after removing their guts for Aramakizake production has become a winter tradition in the town.
Also blessed with vast stretches of forests, mountains and rivers, Otsuchi-Town is a beach town with a rich natural environment providing many popular spots to enjoy a variety of outdoor activities. Among them are Namiita Beach, known as a surfing mecca; mountain climbing on the 1,000 meter high mountain Niiyamakogen; and Kujirayama trail, known for its legends related to whales. These are some of the most popular spots among outdoor sports aficionados.
In 2018, the Otsuchi Town Cultural Exchange Center opened in the town’s central area, the Oshachi district. Nicknamed Oshacchi, this facility consists of a hall, a library, a co-working space and meeting rooms and has become an exchange hub where people from the town and from out-of-town can come together and interact with each other.

Stories of Maekawa Zenbee (also known as Kirikiri Zenbee), a wealthy local merchant who played a big role in the industrial economic development of the Sanriku and Morioka Nanbu domain in the Edo period, are an integral part of the history of Otsuchi-Town. Zenbee, who is often called Kinokuniya Bunzaemon of Michinoku (Kinokuniya Bunzaemon was one of the most prosperous and well-known merchants in Japan during the Edo period), brought folk performing arts such as Toramai to the town and enhanced the local culinary culture through his trade. These traditions are still alive and practiced in the town.
The folk performing arts of Otsuchi include Kagura, Daikagura, Shishiodori, Toramai and other folk performing arts called Furyugei. These traditions are currently preserved by 21 organizations. The most important activity for these organizations is performing dedications to the local sacred places such as Otsuchi Inari Shrine, Kozuchi Shrine and other local Inari shrines during the festivals. Some of the folk performing arts are designated as “Chojirushi,” which are symbolic performances used to cleanse the path ahead of the Mikoshi (portable shrines) and protect them as they pass by. The distinctive roles of the folk perfoming arts in this fishing town might also have their origins in the prayers through which the townspeople expressed their respect for nature.